“The movement you need is on your shoulder…”

One of the more confusing and powerful lines from a song.  I heard it growing up just like so many other people did, but it wasn’t until later that I really heard and was perplexed by it.  From what I understand, Paul McCartney is singing to Julian Lennon, John’s son. Trying to help him deal with his parent’s divorce and moving on – about not carrying the weight of the world on his shoulders.

He sings about finding someone to perform with (Linda McCartney?), letting it out and letting it in (breathing, meditating).  It’s probably as much for Julian as much as it is for him.  Paul initially wanted to remove the “movement you need” line, but John insisted he leave it in, saying it was the best line in the song.

With a new year comes so many things:

It’s a good time to just calm down, step back and breathe.  Accept the movement that’s been on your shoulder all along. 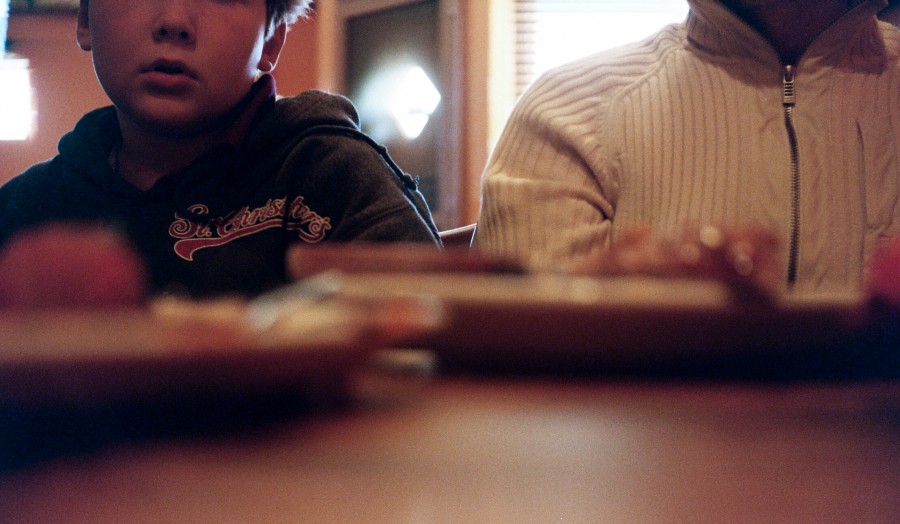 Some people may be perplexed by this picture.  One head is completely cut off and the other doesn’t even include the eyes.  Is that food on the table?  The thing that makes this picture work for me is the light. The way it streams in through the door and windows and dances around the shoulders.  It’s subtle and that’s what I find myself looking for more and more in my photography and it happened almost completely by chance.

Fairly recently, I bought a 1942 Argus C3 from an antique store off of Forest Hill Ave in Richmond, VA. Once it was lubed up, the thing worked like a charm.  A week or so later, I met a friend of mine and his son for lunch at Mamma Zu’s and brought “the brick” (as it’s known) to take some test shots.  I sat down and decided to flip the trigger with it resting on the table.  I aimed it up as much as I could while still keeping it braced against the tabletop knowing the shutter would be open too long for a handheld shot.  Without checking the framing through the viewfinder, this is what I got.

The lens is un-coated which is how the highlights get that hazy glow. It will take some work to get a handle on the effect and I’m sure chance will play its part.